The Politics of Oil and Gas

You are here: Home / The Politics of Oil and Gas

The Politics of Oil and Gas

The purpose of government and politics is the same today as when the Golden Age of Greece developed their philosophies: to secure and protect what the people need. Without putting too fine a point on it for modern societies, the basics are comprised of food, energy, healthcare, technology, and data.

Oil and gas are major energy components today and will remain essential for decades to come. Yes, the world is moving towards more environmentally friendly or renewable energy sources, but oil and gas will help bridge to the future from today, and technology will continue making their carbon footprint smaller.  Notice the switch from coal to oil and gas along with the domestic industry’s efforts to minimize environmental impact.

The politics of oil and gas is easy to trace. It started soon after our nation fell in love with the automobile, a love that fueled our thirst for gasoline. (We were the first nation to drill for oil –

Titusville, PA 1859 and Spindletop gusher near Beaumont, TX 1901). Free market practices then were much more competitive than now, eventually causing the government to rein in the excesses:

Ever since then, the government and major American oil companies have engaged in the typical tug-of-war that a democratic country’s market-driven mixed economy should expect.  HOWEVER, WORLD POLITICS, NOT DOMESTIC POLITICS DOMINATES THE MOST IMPORTANT PARAMETER OF OIL: ITS PRICE!  LET’S TRACE THE TRAJECTORY OF OIL’S INTERNATIONAL POLITICS.

Do you know who the “Seven Sisters” were? They were the major international oil companies who controlled until World War II 85 percent of crude oil production: Gulf Oil, Texaco, Royal Dutch Shell, Standard Oil of New Jersey, Standard Oil of California, Socony Mobil, and British Petroleum.  Notice the verb “were”, not “are.” What happened?

The emergence of political power exercised by a growing number of nations after World War II.  The demand for oil skyrocketed, and those nations fortunate enough to be sitting on oil rightfully wanted their fair share of the wealth for their people. They formed in the 60’s the OPEC consortium to leverage the power contained in their enormous reserves.

Of course, it took decades for national oil companies to take their place on the international stage, but today here are the players: 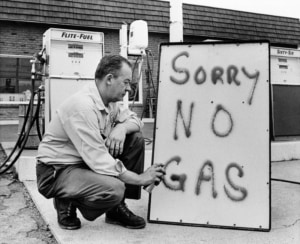 Leon Mill spray-paints a sign outside his Phillips 66 station in Perkasie, Pa., in 1973

America awoke in the early 70’s to OPEC’s power when that organization declared U.S. oil embargoes that caused long lines at gas stations and pump prices to quadruple.

IT TOOK A LONG TIME FOR THE GOVERNMENT TO BELIEVE WHAT DOMESTIC OIL COMPANIES WERE SAYING: OIL PRICES WERE CONTROLLED BY OPEC FOR POLITICAL REASONS.

Though OPEC’s power is less today, much the same can still be said. OIL PRICES ARE CONTROLLED BY INTERNATIONAL POLITICS. AMERICA’S PRIVATE OIL COMPANIES ARE PRICE-TAKERS, NOT PRICE-MAKERS.

In today’s often skeptical and distrustful domestic political climate, criticism instead of credit is too often thrown at important industries, the O&G industry a prime example.  But there are the other industries besides “Big Oil” that today also fall in the crosshairs:

However, those in the know agree that our democratic, market-driven economy does better than any other country or system for obtaining the best outcomes for our people.  There is no country better than America.  ANY OIL COMPANY PROBLEMS ANY OTHER COUNTRY HAS IS CAUSED BY THAT COUNTRY’S DYSFUNCTIONAL POLITICS.

Consider all the above a preamble for what follows: a summary of an attention-getting recent book: Blowout by Rachel Madow, subtitled “Corrupted Democracy, Rogue State Russia, and the richest, most destructive industry on Earth.” Let’s objectively take a look at what it’s saying.

The oil and gas industry – if left to its own devices – will mindlessly follow its own nature. It will make tons of money. It will corrode and corrupt and sabotage democratic governance. It will screw up and – in the end – fatally flaw the whole freaking planet.

If the author were more clever, the word “freaking” should have been  “fracking.” The book’s last chapter concludes with these words:

“Containment is the small-c conservative answer to the problem at hand – democratically supported, government-enforced active and aggressive containment.  It’s the only way to fight against the industry’s reliance on corruption and capture Democracy either wins this one or disappears. It oughtta be a blowout.”

You decide if you want to read the book. Perhaps you should read reviews posted on the Internet.  You’ll find the better ones are similar to this:

“Blowout” is a rollickingly well-written book, filled with fascinating, exciting and alarming stories about the impact of the oil and gas industry on the world today. While she is clearly animated by a concern about climate change, Maddow mostly describes the political consequences of an industry that has empowered some of the strangest people in the United States and the most unsavory ones abroad. It is “essentially a big casino,” she writes, “that can produce both power and triumphant great gobs of cash, often with little regard for merit… “Blowout” is a brilliant description of many of the problems caused by our reliance on fossil fuels. But it does not provide a path out of the darkness.”

So, what’s the path out? Please read the article “Energy for Future Presidents” posted on our Website.